I was asked to give a communion mediation for our church. This is what I shared...


And Jesus Christ was revealed as God’s Son by his baptism in water and by shedding his blood on the cross—not by water only, but by water and blood. And the Spirit, who is truth, confirms it with his testimony. So we have these three witnesses— the Spirit, the water, and the blood—and all three agree. Since we believe human testimony, surely we can believe the greater testimony that comes from God. And God has testified about his Son. All who believe in the Son of God know in their hearts that this testimony is true. Those who don’t believe this are actually calling God a liar because they don’t believe what God has testified about his Son. And this is what God has testified: He has given us eternal life, and this life is in his Son. Whoever has the Son has life; whoever does not have God’s Son does not have life.

The law and I go way back. Early in my adult life I had my share of traffic tickets. Speeding, unsafe driving, running an orange light. I’ve gone to court for a few of them. Simply, you tell your story, the law enforcement officer tells his story. Testimony is given. You win some and lose some.

I’ve served as a Federal Witness. Just after we moved from the Chicago area fifteen years ago, I received a call from a Federal Agent informing me that the trial of some men who were charged with bank fraud was on and that I was to be the final witness. “Get your bag packed because you’re going to testify.” I did and the men were convicted. It wasn’t just my testimony, but the testimony of others and the evidence collected.

I’ve also had the privilege of being in three jury pools. I’ve served on a jury in each of them. Although the three cases were totally different, the basic instructions were very similar. “Listen to the witnesses. Hear their testimony. After receiving instructions from the judge, discuss what you heard in court with your fellow jurors. Come to some form of agreement.” And in each case we did.

Since we believe human testimony, surely we can believe the greater testimony that comes from God. And God has testified about his Son. All who believe in the Son of God know in their hearts that this testimony is true.

So, what are we to do with the testimony given to us by the Holy Spirit and the water and the blood? Ponder it. Discuss it with your friends and family. Come to some form of an agreement. Share it. Testify.
Posted by Mark Aubrey at 11:21 AM 3 comments:

What I've Been Watching

It has been a while since I've conducted an interview and shared it here, so let's kick off the new year.  Another in a series of drive-by interviews.  Intended to be an introduction to an artist, not their whole life story.

Back during the holiday season (read: Christmas and New Years), I started to listen to the music of Kenny Eng.  I really liked it.  Guitar driven.  Sophisticated, yet simple song writing. Because some music fans are gearheads...
Q: What guitar/instrument are you playing the most these days? Maker and model preferred.


Hm... let's see. The answers I always give because I always come back to them in some point during the year are: Jeff Buckley- Grace, The Beatles- Abbey Road, Miles Davis- Kind of Blue, D'Angelo- Voodoo and Jimi Hendrx- Band of Gypys (sic) or Axis: Bold as Love. But most recently, I have to say that Kanye West's "My Dark Beautiful Twisted Fantasy" and the "O Brother, Where Art Thou?" soundtrack have been making their way to the top of the playlists. Bill Withers and Bob Dylan are also heat seekers on my internal chart. As I play and write more, I become more enamored with the zen of songwriting. Being simple, yet having complexity and depth is a tall order for a four minute song.

Oh and if I could be any kind of tree, I'd be a redwood. Or a little bonsai tree. Those things are awesome.


Future Plans...
Q: What are you currently working on? Recording/shows/tour/writing/etc.


My future plan is to be able to completely support myself financially on music. More tangibly, I'm going to start working on my first full-length, fully produced album with my band probably around late February. I would like to continue to performing and improving with my band. We're pretty good already but with the talent that those guys have, we could be something special. I also want to continue to write songs but at a faster pace than I have in the past. My output for last year was slim, but I really, really like those songs!

I just went on a West Coast tour with Rob Deez, Isaac Cheong and Travis Peterson (driver) so I'm not sure when I'll head back out again. It's a lot of work to tour independently from a label but I love it so it will definitely happen again. Locally, and by that I mean San Diego, I would like to continue to play shows that I'm really excited about. I already have a few really special ones lined up so the future is looking pretty great. You can find more at kennyeng.com.


My connection to Kenny Eng?  A few years back I started a sports card blog.  One of the bloggers I met online was Travis Peterson (the driver mentioned above).  He has been a fan of Kenny's for sometime, tirelessly promoting him via Twitter.  Travis wore me down.

Kenny plays a variety of music.  My favorite, so far, is "Call You When I Get There" from the Live at Lestat's EP.  There's a polished rawness about his playing.  Some of it reminds me of  Brooks Williams' How the Night-time Sings CD.

Look him up.  You'll probably be glad you did.  I know that I am.

Caroline has always shown an interest in photography.  This year Santa brought her a Fisher Price digital camera.  Here's a sampling of some of her work.  She selected the captions.


She doesn't quite have the whole "you have to keep the camera still" part of photography, but she's having fun.
Posted by Mark Aubrey at 9:19 AM 5 comments:

Come Into My Parlor

You may find some misspelled words in this opus, but if so, overlook them or blame them on the editor's third assistant, who is supposed to take care of such things.  I can spell and I own a dictionary, but my ability to typewrite was impaired, to say the least, the night of March fifth.

That is the opening paragraph of the title story of Hugh B. Cave's Come Into My Parlor. 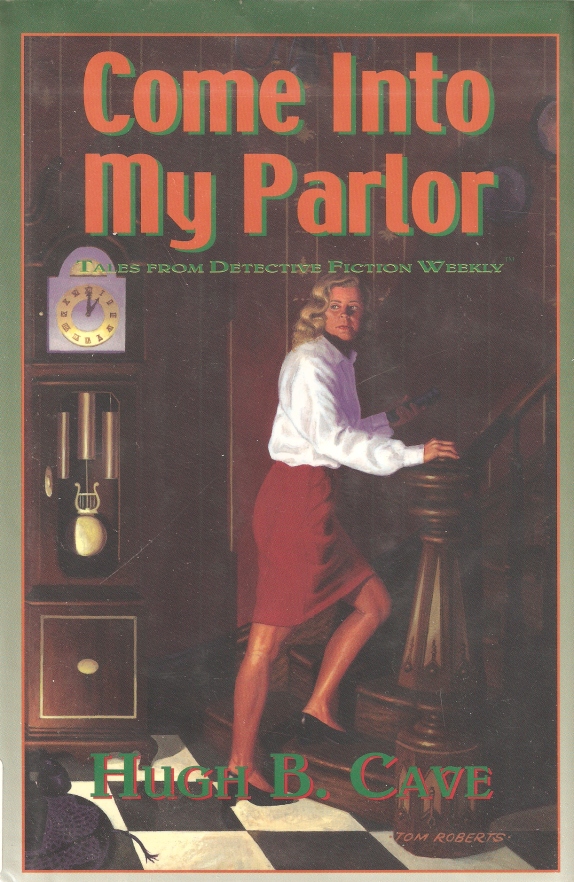 This is a collection of stories by Hugh B. Cave, a writer of pulp fiction.  That opening paragraph tells more about the book than just that story.  The editing of this edition had much to be desired.  Misspelled words, poor kerning, especially near punctuation.  These errors did not make the book unreadable, but they detracted from the pleasure of reading.

The stories themselves were quite enjoyable.  Short enough to polish off quickly, but each was different so that they were fresh. 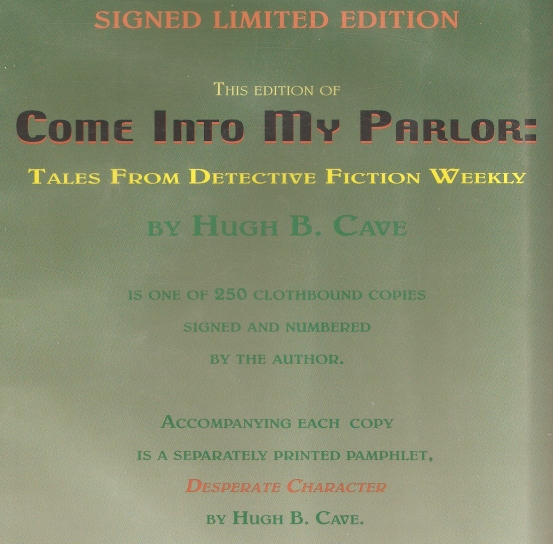 I had a friend check this copy out from the Knox County Public Library.  It seems strange to me that a library would have a signed limited edition book in circulation. 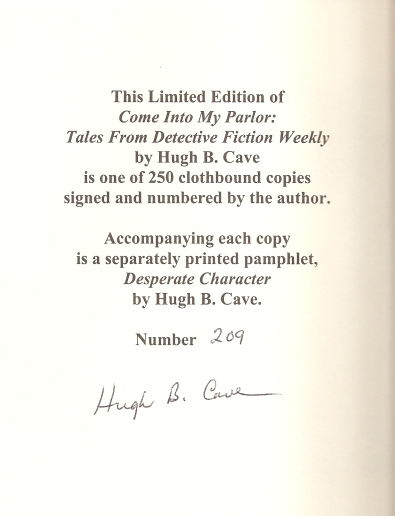 I guess that one of the downfalls of having it in circulation is that it can become damaged. In this instance, the pamphlet, Desperate Character (which I assume is another story), is no longer with this book. There is a sleeve to hold the pamphlet, but it is empty.

Worth reading, but I wish that the editing had been tighter.  I'd recommend it.
Posted by Mark Aubrey at 11:20 PM 1 comment: