This is the third and last of the three drive-by interviews with the main participants of the upcoming "Songwriters in the Round" show that will be held on Saturday, November 14. Three outstanding musicians and songsmiths will come together for an evening of good music at the Westridge Auditorium Theater in Elgin, Illinois.

Pierce Pettis was the last to respond to the questions, so I'll finish up with him.

Q: What are you actively listening to?

Q: What music is inspiring you?


Some of his silverware . . . but seriously, folks. Mark was the funniest and most honest person I've even known. He was serious about his work, rather than himself --reversing the usual trend.

For more info about Pierce, please visit his website, PiercePettis.com.

My connection to Pierce Pettis...

Hmmm... I really don't have one. Sort of, but with his music. It was probably the late fall or early winter of 1990. Angie and I were in a Chicago area mall, walking through a store. The CD player was playing Pierce's version of 'In The Bleak Midwinter.' I think we stopped all shopping and stood and just listened to it. After the song finished, we found out which CD it was on (Windham Hill's, "A Winter's Solstice, Vol. III"). We immediately bought it. Today, when I told Angie that Pierce had responded to the interview questions she said, "Oh, I can't wait until we start playing Christmas music. 'In The Bleak Midwinter' is the first song I want to play." I agreed. I think I'll be pulling the Christmas music out this weekend.

Ticket information can be found at TriJangle.com.
Posted by Mark Aubrey at 3:00 PM 1 comment: Links to this post

This came from a copy of the North Countryman, as supplied by the Northern New York Library Network Digital Newspaper project. It is either from 1964 or 1965.

Going back a few decades I found this advertisement from the North Countryman from 1933. 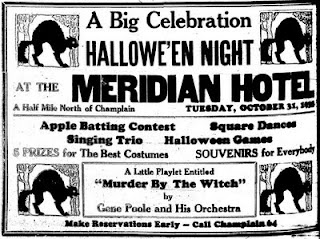 This is the second of three drive-by interviews with the main participants of the upcoming "Songwriters in the Round" show that will be held on Saturday, November 14. Three outstanding musicians and songsmiths will come together for an evening of good music at the Westridge Auditorium Theater in Elgin, Illinois.

Pierce Pettis, Pat Terry and John Austin are the featured artists. In case you missed it, the interview with Pat Terry can be found here.

John Austin was the second to respond to the questions, so he goes next. 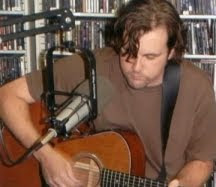 
I play a Taylor 514-C that Doug White presented to me as a gift back in the mid 1990s, after the Takamine Santa Fe that I'd bought from Bill Mallonee was broken into pieces when it was run over by an airplane. (I bought the guitar from Bill after my beloved 1970 Guild D-25 was stolen.) I was drawn to the Taylor 514-C because it had a darker tone than the other Taylors that were out at the time. It's aging nicely!


I would echo Pat Terry's list. Honestly, I'm not listening to much music right now -- except for some old 78s from the early 20th Century that I sometimes play on my late grandmother's Victrola (which is almost the antithesis of an iPod). Some are from the 1910s and feature really cool Hawaiian guitar parts. Unfortunately there is still something wrong with one of the Victrola springs and half way through a song I have to get up from the sofa and start cranking the thing again.

But, in general, I'm inspired by artists who have a body of work; I've never really been inspired by new artists. The more dead they are, the better! Willy Deville, who died earlier this year, was a great, under appreciated singer/songwriter. Warren Zevon died a while ago, but I like the two records he did before he was diagnosed with cancer: "Life'll Kill Ya" and "My Ride's Here" (much of which he wrote with the also now dead Hunter S. Thompson). I like the Ray Davies song "Working Man's Cafe", and "Hide and Seek" by Imogen Heap. As far as the current state of the music industry goes...I find the songs and attitude of Charlie Peacock inspiring. (And he's very much alive!)


Capturing good music is a lot like collecting butterflies or bottling bees. And the secret to not sinking under is in having a good sense of humor -- you've got to hold onto that for as long as you can.

For more info about John, please visit his website, OfficialJohnAustin.com.

My connection to John Austin...

In the late 1980s and early 1990s I was involved with Community Christian Church in Naperville, Illinois. I don't remember the sequence of events, but a new church plant was being started in Chicago. Services were to be held in a nightclub. John was asked to play and I was asked to play with John. We opened the first service with David Bowie's "A Space Oddity." Major Tom and all that. I'm assuming that Doug had his hand in this somehow or another.

Ticket information can be found at TriJangle.com.
Posted by Mark Aubrey at 10:00 AM 2 comments: Links to this post

My friend, Doug, is producing a show. On Saturday, November 14, three outstanding musicians and songwriters will come together for an evening of good music at the Westridge Auditorium Theater in Elgin, Illinois.

Pierce Pettis, Pat Terry and John Austin are the "Songwriters in the Round".

I asked Doug if I could do a short interview with each of them. I tossed out three questions, one for the gearheads, the second one as the obligatory question (and I told Doug I wouldn't use: If you were a tree...), and the third one as the thread that runs through all three of their lives.

Pat Terry was the first to respond to the questions, so I'll post his first... 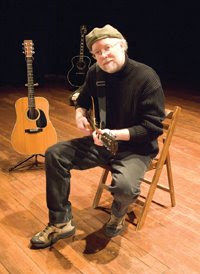 
My favorite guitar is still my 1970 Martin D28, which I bought brand new and have used on every project I've done since then.


I've been listening to Wilco, Rosanne Cash, Johnny Winter, and Leonard Cohen... and of course, there's always some Lennon/McCartney thrown in for good measure.


Mark always drove home the importance of doing whatever was vital and real to me at the time. In the end, I think as songwriters that's all we have to offer.

For more info about Pat Terry, please visit his website, PatTerryOnline.com. His Q&A section has a lot more questions and his answers are more in-depth, but I specifically didn't want the guys to spend hours answering my questions. This was to be more of a drive-by interview.

My connection to Pat Terry...

Pat (along with James Dean Hicks and Roger Murrah) wrote the song, National Working Woman's Holiday. Sammy Kershaw recorded it in 1994, where it made it to the #2 spot on the U.S. Billboard Hot Country Songs Chart. Sammy's current keyboard player is Steve Farmer. I went to high school with Steve and were in a number of bands together, both legit and pick-up bands. So, it is almost like Pat and I are old buddies.

Ticket information can be found at TriJangle.com.
Posted by Mark Aubrey at 1:00 PM No comments: Links to this post

Yes, Angie did buy this at the store a few weeks ago. But I'm talking about the new cell phones that Angie and I have.

Blackberry 8330 Curve
Okay, I started this post back in September. You can see that I'm up on my blogging. Actually, I've been rather busy, with Buddy Walk, football games, life in general.

We decided at the end of August to hop on the "phone as a data device" train. We had some bar phones that we got from Sprint. They worked well, but we cut out texting from the plan. Didn't need it back then. With Edison in football and a different church schedule that Angie or myself (he's a teen, don't you know), we opted for the Family Data plan. More minutes, no extra cost for all the data and texting one could want.

The Blackberrys work well. Until this Wednesday morning. I got the "JVM error 102" on mine and it wouldn't boot. I spoke with Sprint technical service. Three technicians and 35 minutes later they replied with, "Yes, we're aware of that error. No, we don't know what causes it. No, we don't know how to fix it. Please take it to a Sprint service center for repair or replacement. Oh, you don't have insurance on the device, so you'll probably have to buy a new one. Good luck with that."

Actually, they were kind and helpful. I selected the Sprint store in west Knoxville, signed up for an appointment (online) and headed out the next morning.

About 25 minutes after my arrival, I had a new Blackberry in hand, already activated. I was fortunate to have backed up my old one the night before it died. Weekly backups are now going to be standard operating procedure.

Edison also got a new cell phone. I've forgotten the model, but it is centered around texting. He likes it. He likes it so much that he got in trouble for using it. The details don't matter, but the phone was just returned to him last evening. I think that he learned his lesson.

So, text me if you want to. Although the Blackberry has a QWERTY keyboard, my thumbs don't move very fast. Don't hold your breath waiting for me to reply.
Posted by Mark Aubrey at 11:20 AM 1 comment: Links to this post