In an old notebook, probably of 1890 vintage, was found the score-sheet of a game between two Champlain teams. The "Shop" team included George Lambert, Fred Harmon, Amos Lambert, Eddie Roberts and Israel Monnette; among the "School" players were Ralph Douglass, Chalres Doolittle, Walter and Moss Graves. There were only two strike outs by the Schoolers, to six by the Shoppers. Although there were but but nineteen hits in the game, the final score was: Shop 22; School 29. The 58 errors in the game might account for many of the runs.
In sharp contrast, the Champlain-Rouses Point game of Aug. 20, 1913, was very much of a pitchers' battle. On the Point team were Mero, Landry, Strong, Seguin, Tyndall, Brothers, Lattourelle, Hoag and Ryan. The Champlainers were Spelman, Dunn, Miller, Barber, Garand, Lafountain, Mellen, Coonan and Malcolm. Only four hits were allowed by each side. Ryan and Malcolm, the pitchers, went all the way; Ryan struck out 17 men and Malcolm fanned 23! The final score was 3 to 2 in favor of Rouses Point.

Posted by Mark Aubrey at 4:19 PM No comments:

This item came from an August, 1875 edition of the Ticonderoga Sentinel published in Ticonderoga, NY. Some of them are still relevant some 131 years later.

People who are puzzled at the technical phrases used in base ball reports are commended to the perusal of the following definitions.

Field - The cow pasture where the leather-hunting is performed.

Base - Salt bags scattered around in the grass for the players to jump on.

Nine - A number of roosters in knee breeches that constitute a base ball deck.

Umpire - The chief baller--he bawls out "strikes." His other duty is to sit on the top of the bat and smell the ball as it goes by.

Judgment - The umpire's opinion after taking a smell.

One ball - What the umpire says when the smell proves unsatisfactory.

Strike - A miscue by the batter.

Put out - The fellow who tries to get it without pay five cents.

Dead ball - One which comes to life again after being buried--in the hands of the pitcher.

Foul - A ball which bounds just the way one is positive it will not.

Fair foul - A little one for a cent.

Balk - "A breach of promise" indulged in by the pitcher.

Stealing a base - Stuffing a bag in the car and walking off to the next, when the catcher isn't looking.

Beauty - A ball so hot that the second baseman lies on his stomach to avoid it.

Hot balls - One that singes the short stop's head as it goes by.

Fly - A ball which scorns the earth, and, like the gentle horse fly buzzes around in the elevated atmosphere.

Wild throw - Slingin at the third baseman, and killing a small boy in right field. 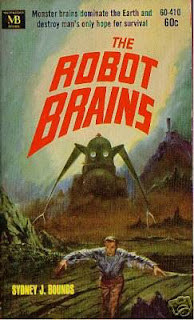 I had to go out and get the oil changed in the Dodge van. The local Dodge dealer had a great deal for the change. $17.95. Can't beat that. On the way to the dealer, I passed a new (to me) thrift store. I hit it up on the way back. They had lots of interesting stuff at very reasonable prices. And it was clean. It looked clean and smelled clean. I picked up a few books, a magazine and CD. All for 2 dollars and some change. Two of the books are Lord Peter Wimsey novels. Dorothy L. Sayers' wonderful British crime solver and man about town. Strong Poison and Have His Carcasse are the books. I've read quite a few of the other books (and turned my mom on to them) but haven't read these. The last one I read was Busman's Honeymoon. It took me a long time to get through that one. I was reading it while Caroline had her heart surgery at Vanderbilt. I don't know if when I tried to continue on reading, I was associating memories of the surgery and stay with it or what, but it took me over a year to finish it. I'd recommend Lord Peter (a collection of short stories) if you want to start reading DLS's wonderful series. 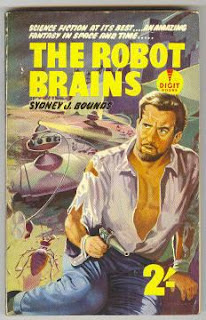 I also picked up a copy of The Robot Brains by Sydney J. Bounds. The upper left cover is very similar to the one that I picked up. I found this image on ebay.com. The cover to the right is one from the independent bookseller's network. I don't think that I'll actually read it. Probably pass it on to my brother, who introduced me to the joys of reading Science Fiction. I'm interested into the evolution of covers for different printings of books. What first caught my eye was the different covers for Louis L'Amour's The Tall Stranger. I had four different covers, from the late '50's/early '60's through the early '80's. They went from a Clint Eastwood look, to a bare chested hunk firing a rifle from a wagon that is speeding out of control. I guess twenty five years later they were trying to market to a different audience. I made a color photocopy of the four different covers. It hangs in my office. I should scan them in and post them. A little look at the way booksellers perceive their market.

I also picked up the CD, Such A Pleasure, by Myron Cohen, comedian. The audio is a bit scratchy. My guess is that the producer just transferred the LP to digital format. I'd never heard of Myron Cohen. On first listen there are some very funny bits. I need to listen to it again. He slips into a New York Jewish accent and I haven't read any Leo Rosten in many a year, so I've lost my ear for it.

The magazine is the May/June 2005 issue of The History Channel Magazine. Civil War Snipers, 5 Motorcycle Marvels, Khrushchev Comes to Iowa and other gripping articles.