Time for another of drive-by interview.  These are intended to be an introduction to an artist, not their whole life story.

Today we get to talk with Troy Martin, Tucson bass player.

It took a while to coax some answers from Troy, but when his fingers hit the keyboard, they did not stop.


Because some music fans are gearheads...
Q: What basses/instruments are you playing the most these days? Maker and model preferred.


I just decided to retire my beloved 20-year-old Rickenbacker 4001CS. It needs some TLC on the finish, because I played it several times a week for 15 years, and I'm noticing it really does need a fret job. It's just a gorgeous instrument, and currently worth more than any art object or piece of furniture in my house, so I need to baby it for a while before it's ready for prime time again. Here is a video shot during it's very last live performance last December.

A good friend of mine, Jim Waldridge, has a habit of collecting and reselling instruments from advertisers on Craigslist, and in May 2009 ran into someone selling a six-string bass for $300. Jim saw what it was and snapped it up. It had the anchor screws missing off of two of the tuning machine heads (so it was impossible to keep in tune), had the action cranked uncomfortably high, had scratchy electronics in need of cleaning, and had what seemed to be three separate brands of strings on it. I had just finished playing at an evening service at the Tucson Teen Challenge Men's Center (where Jim was serving as Director at the time) on a Sunday evening, when Jim came up to me and said, "come to my office after dinner. I have something I want to show you."

I met him at his office, where he unzipped a black gig bag and took out this SG 6-string with a dark mahogany body and a rosewood fretboard. I saw what needed to be done to this bass to bring it back to life—saw its potential. Jim said, "if you can make this bass playable, it's yours for what I paid for it." Hmmm, a thousand-dollar bass for $300? Works for me!

I took it home, blew out the electronics, changed the pre-amp battery, replaced the machine-head anchor screws, lowered the bridge, did an adequate neck adjustment, and threw a brand-new set of D'Addario XLs on it. Since June of 2009 this instrument has been the cornerstone of my sound. The low-B string could demolish residential areas, and the Bartolini pickups are so punchy and powerful. The mahogany body makes it pretty heavy, but I was already used to the wide 6-string neck. I still really need to get this instrument properly set up, but I'll get that done soon.

In 2006, when I first thought of going 6-string from my 4-string Rick, I bought a Rogue LX406 Pro from Musician's Friend for $250 to see if I liked it. I did, and played that until I got the SoundGear from Jim Waldridge. The neck is a little wonky, but it's more than playable, and the dual Jazz pickups are so powerful. I keep the Rogue as a backup bass, just in case.

I play all of my basses through a 20-year-old KMD 200-watt combo amp. I only use a bit of sound shaping EQ and a touch of compression, both built into the amp. I use no pedalboards or any other effects. 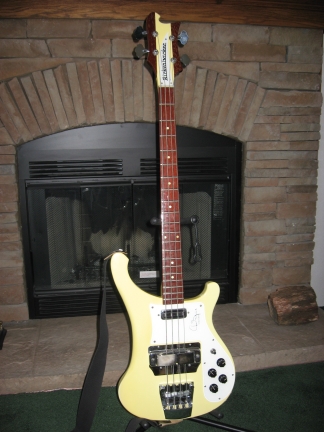 
I've always been a prog-rock guy, so I periodically come back to my familiars, like Yes' "Relayer," "Tales From Topographic Oceans" and "Going For The One" albums, as well as favorite listens like ELP's "Brain Salad Surgery," Genesis' "The Lamb Lies Down On Broadway," and Jethro Tull's "Thick As A Brick" albums.

For the last four years my favorite band has been Porcupine Tree, especially their period from "In Absentia" to the present, where they successfully and chillingly blend their Floydian tendencies with melancholy English folk and dark, down-tuned metal. Plus, they have the single best drummer on the planet: Gavin Harrison.

My love for the Swedish symphonic prog band The Flower Kings has recently led me to a new find: Agents of Mercy, containing two of The Flower Kings' members, guitarist and founder Roine Stolt and bassist Jonas Reingold (currently my favorite bassist). Agents of Mercy sound like a modern version of the Peter Gabriel-era Genesis, with just as much, if not more, of an edge.

I recently discovered an instrumental technical metal trio called Animals As Leaders, fronted by 8-string guitar virtuoso Tosin Abasi. There are few words to describe how good these guys are. They just released their second album "Weightless."

My taste may seem kind of funny in light of the fact that I play in folk-rock and country-rock bands, but what we play publicly is very rarely what we listen to privately.


I just left Smallvox, my main band of the last 18 months, to concentrate on some developing projects.

The most exciting thing right now is my current position as bassist/vocalist supporting Tucson legend LeeAnne Savage (Arizona's Sassiest Songstress), playing her original alt-country-pop-rock in a band of musicians who are the best I have ever played with, bar none. We just had our first public appearance last Saturday at Tucson's Whiskey Tango nightclub, which was an astounding success. It is her intention that we play exclusively high-profile gigs opening for touring national artists who come through town, and also similar appearances in the Phoenix area. We'll see where it goes from there.

I also have the privilege of playing with The Tangelos, all-original soulful folk-rock featuring the voice and songwriting of Joshua Butcher. I just joined them in January. We have a two-set appearance at Tucson's PLUSH nightclub next week (Tuesday, Feb. 28), as well as a two-night appearance in April at the famous Bisbee, AZ, dive, St. Elmo's. There is a possibility that The Tangelos will record their second album this year.

I have had occasional gigs as substitute bassist/vocalist in the long-time Tucson country-metal act Gila Bend. Those have been a blast, and working with frontman Loren Dircks has been in many ways the highlight of my musical career. Those will probably continue, as well as constructing a brand-new act with Loren that he is calling "Van Waylon."

I'm hoping that as my musical credentials grow, I can begin to make more of my income from playing, and basically generate a new economy where I can begin to write and record my own songs, and hone that craft. That is the ultimate goal.

What's my connection to Troy Martin? Back in 1978 my folks moved to Sierra Vista, Arizona.  I figured that I should tag along.  Buena High School didn't have an orchestra, so I joined the experimental jazz band, overseen by 'Coach' Rick Klein.  That led to my involvement with the Buena Show Band, also overseen by 'Coach' Klein.  I played cello on the LP that we cut and the next year, my senior year, I played bass.  Two years before, Troy was playing bass with the BSB.  We've never met.  In 2011 a BSB reunion was held.  I wasn't able to make it, but Troy held down the bottom end for the 1970 alumni.  Troy and I have become friends on facebook. We share several 'real' friends and I'm sure that we could spend a few hours listening to music, telling stories, discussing any subject we'd wanted to.  Someday I'd like to try that.

Want to know more about Troy or the bands he plays with?  Click with abandon.