I was perusing some magazines over at Google books and came across these ads. The are mostly from Popular Science and Baseball Digest.
Please do remember that we celebrate the birth of Christ on Christmas, not just observe the traditions of Santa, presents, food and family. Although those things don't hurt. Enjoy. 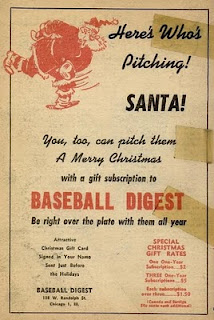 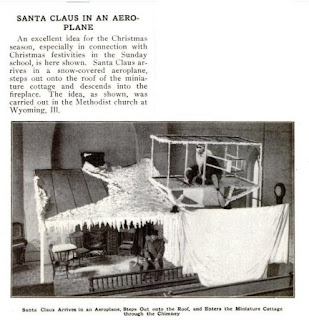 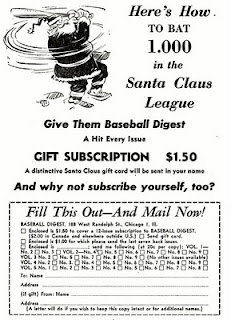 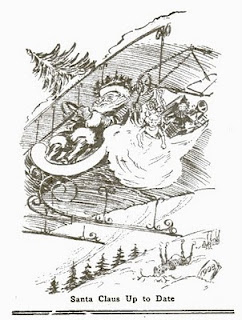 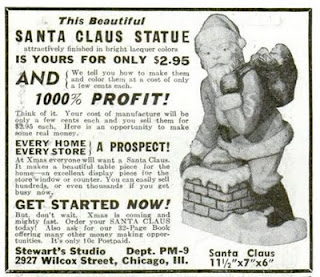 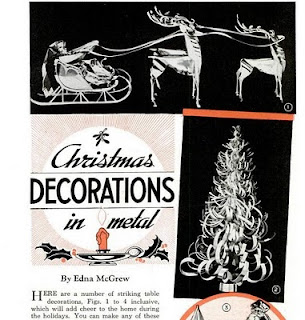 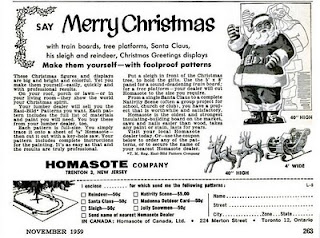 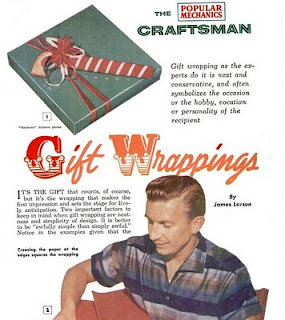 Our PC died. We had mighty winds and the power was flickering at home. That is not good. It did something really bad and some Windows boot files got corrupted. I've tried to restore them, but it still isn't working.

And the legs of our kitchen table are going bad. Not the legs themselves, but where the bolts that hold them on. The insert nuts are made of cheap metal and are falling apart. A trip to the big orange hardware store sort of helped, but not really. The next day, a trip to the big blue hardware store got me on track. Two legs have now been fixed, I might try to fix the other two over the Christmas break.

I need to go and tune the piano at church. It is difficult to keep the temperature and humidity constant in a large room that is only used for about eight hours per week. My tuner broke about a month ago and I haven't replaced it.

With the heavy rain that we had the last few days, Caroline's school system closed due to flooding. Her school is fine, but the school system covers the whole county. So Angie and I split up Caroline duties yesterday. It is tough when the day gets fractured.

And I did something to my left foot. I can't describe it, but it isn't comfortable to walk on. Resting last night seemed to help. I might have pulled something or stretched it in the wrong way.

All this to say that I've had better weeks.

Then, this morning, I received an email from church updating us on one of the missionaries that we support. I share it here, reminding me that my problems and issues are minor and that we serve God that can do more than we can imagine.

It has been an exhausting week. Dealing with the logistics and technical aspects of the optometrist surgeon’s visit has been a borderline nightmare. Not only is getting to Samban rough, but once here, you have the knowledge that whatever you do not have with you means that it is going to be impossible to get it in time. So we had been planning for two or three months, but it just didn't seem like enough time. All the traveling was worked out. All the technical issues were discussed and planned for, so everything should be alright, or should be manageable.

It ended up that the traveling was the easy part. Picking up the doctor and his two nurses, traveling over road, and then by canoe went off without a hitch. The first morning here the doctor realized that our facilities lacked two things that he needed. One was an operating table (the right length, width, and height). He also needed a table that would serve as a microscope stand. With a few pieces of timber and some odds and ends of plywood, by 1 pm, he was ready for his first patient.

The generator of ours was running fine. The fan to cool the microscope was going fine. Two patients into the day the generator started having power surges. What's going on? Fortunately, we had a UPS for the microscope, so it wasn't damaged. I cleaned the air filter and then the fuel filter. The fuel filter had so much water in it that it was shutting down the operation of the generator. The bad thing is that we only had the one drum of fuel, so however bad the fuel was, it was all we had. So, this meant that basically every hour (with the generator still running), I would quickly take the fuel filter cup off, empty the water out, clean it and get it back on before the motor shut off due to the lack of fuel. There was a little pressure involved, but fortunately the UPS also had battery back up so if the generator shut down, I still had five minutes of power before the microscope shut down. I forgot to mention that he had patients on the operating table (literally under the knife) while all this was going on.

The doctor operated on 16 people over the course of 3 days. Seven of these people had one eye done the first and second day, and then the second eye on the third day. Of these 16 people, 5 or 6 of them have basically been blind for the last 3 or 4 years or so. All of the patients were having cataracts removed. There’s something about the UV rays here in the tropics that makes cataract problems an issue. The second morning before operations started the doctor would remove the eye patch and check the eye he had operated on the previous day. Those that had no vision would stare in shock, and then be in utter elation when they could "see" again.

One old man literally sang all the way home. He had been led from his house to the clinic. That day he led the pack as he left the clinic. On the day of the operation on his second eye, he didn't even wait for those to escort him. He was walking as soon as first light hit, so he could be first in line for the operations. Saturday he had his patch removed and he had the use of both eyes. To paraphrase what he said, "That's it. I'll never be found sitting again. My children and grandchildren are going to have a full time job trying to find me. No more sitting in the house for me."

I have other stories about comments and reactions of these patients. All of them are priceless. Yes, I'm exhausted, but I'm absolutely thrilled for these 16 people who have had sight restored. During all these operations, besides fuel problems, the fan that was to cool the microscope burned up. Fortunately we had a second fan. If the doctor doesn't have the microscope, he can't operate. If the fan doesn't cool the microscope, it will not run. So we were glad that we had the two fans. The second fan burned up as well, but only halfway through the operation on the last eye. For some reason the UPS caused the generator to have power spikes (which have not stopped even after we are no longer using the UPS). The generator is what we use to power the electronics (like this computer) in our house and other equipment to do our work here in PNG. All this is fixable.

I don't know about you, but in our family the countdown for Christmas has begun (especially for the 3 kids). For some reason I've always found it really easy to have the Scrooge mentality around Christmas. So here I sit writing this email with no fan, so I'm sweating just typing. The washing machine won't pump out water on its own, so every few minutes I'm having to get up to pump out the water for it. We've also got a lot to do because the plane is coming tomorrow and we are headed into town for some shopping for supplies and to get some literacy material printed. It would be really easy to focus on the bad. When things break down out here, it is a waiting period before we can either get parts, or replace it. Sometimes replacing things has to wait until funds are available.

However, if you gave us (Karie and me) the choice between two fans, a washing machine that worked properly, or 16 people with restored sight, I think you know what the choice would be. Those 16 people have been dealing with poor sight for years, and it’s hard to feel sorry for yourself because you can't turn on a fan. We can replace fans, we can get a new washing machine, maybe not when we want to, but those types of things are replaceable. To have the ability to change someone’s life through restored vision? That is irreplaceable.

All these things I’ve mentioned remind me of the fact that over 2000 years ago an event took place in history that changed the course of human history, yet so many people are blind to the fact of what a magnificent change took place. How simple it is to restore physical sight for a doctor who is skilled and has the right tools. How hard it is to change the attitudes of those who don't care to see what God did so many years ago, and does every day. It's easy to focus on what is not right in the world. It is easy to see the defeats close at hand. Yet the victory that is in our future, because of what was done so many years ago, is so much greater than what we have to deal with right now.

Our little world here in Samban can now see a little clearer because of what one doctor did. Hopefully, we can see the greater vision of what Christmas means through the gift of God's Son.