My wife supports me in whatever I do

Last night I'm sitting at the computer, scanning some things for a DSAG, checking emails and typing up some RolePlay for BattleMaster.

My wife comes over and says, "So how's your luser game going?"

"I'm so proud of you, you little warrior. Or whatever you are."

Then she pats my shoulder and walks away.
Posted by Mark Aubrey at 2:28 PM 3 comments:

Boys and their Toys

It's Sonny (the nickname that my father had) and his playthings. The last photo is slightly disturbing. More Champlain artifacts... 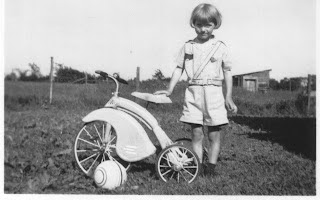 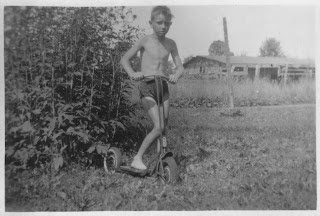 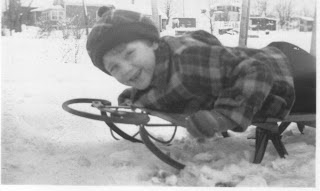 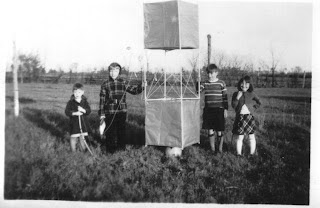 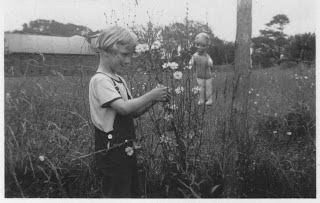 Another in the artifacts from Champlain. 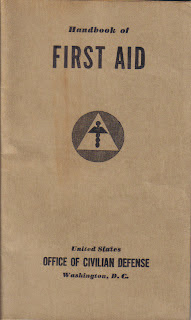 What sort of literature comes in a plain brown wrapper? 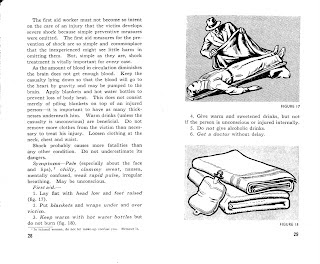 This page is representative of the rest of the book.
Posted by Mark Aubrey at 10:52 PM 1 comment:

When my folks were here a few weeks ago, they shared many different artifacts that they found at my grandmother's house. One of them was a small booklet titled:


I have taken the liberty to reproduce (without permission) one of the articles here. 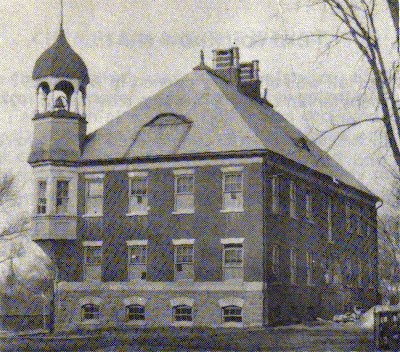 The lamp of knowledge came to Champlain in 1792, with an Englishman, Michael Fothergill, as the first teacher. Four years later the first Board of Trustees was chosen, followed in 1797 by the first schoolhouse -- a log building near the railroad crossing on Oak Street.
The second building was of frame, built a few years later on Church Street where the "locker plant" now stands. This was also used as a blockhouse during the war of 1812, ans was burned in 1814. The U.S. Government reimbursed the owners to the amount of $400.
A brick building was built on the same site at a cost of about $1100. This building was 40 by 26 feet. It was sold by the School District in 1884.
The Champlain Academy was erected in 1842, at the corner of Elm and Prospect Streets. It was a three story brick and stone building, 40 by 80 feet, and cost $5,200, including furnishings. Destroyed by fire in 1887, it was replaced at a cost of $11,000 by the building shown above, to which an addition was built in 1905. This structure was complete destroyed by fire in December 1940, the site now being occupied by the home of Mr. Carl Fresn.
The new building was built in 1941-42 at a cost of $171,000, which is now the present grade school for our area of the Northeastern Clinton Central School.
Consolidations of the many small school districts started in 1860; continued with the establishment of the Union Free School System in 1871 and the gradual expansion into our present Central School System.
Notable among our early instructors are Dr. William Beaumont, who taught School in Champlain in 1807-10, and Jehudi Ashmun in 1815. Recent principals before Mr. Maher were Mr. Bacon, Marvin and Codding.

Dad had sometimes mentioned that when he was in grade school, the school had burned down. I didn't know the whole story. Since a picture is worth a thousand words... 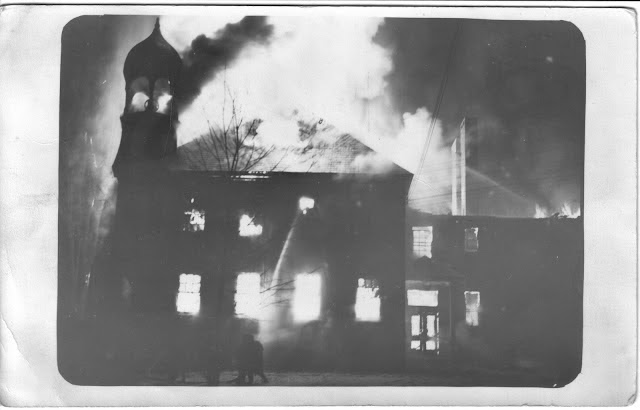 I'm not sure how this photo ended up in my grandmother's house, but I'm glad that I have a copy of it.
Posted by Mark Aubrey at 3:01 PM 3 comments:

I haven't posted an entry in a few weeks. Life has been busy. Sometimes a good busy, but busy.

Angie does such a good job keeping up with her blog, I often don't have much family type stuff to blog about. When an inspiration hits me, or I find some hook to use, I check her blog and find out that she's already written about it. Today, because she's busy with church things (special music practice, service order prep and then an informal dinner for the staff only), she won't have time to blog during the day. I'll scoop her.

This morning, at about 10:30am, we signed a contract for the sale of our house. A nice young couple had looked at it before, and then their circumstances were such that they made an offer on Friday. Things were inline, so we accepted. (There's a lot more legal mumbo-jumbo that went on, but that is the sum of it.)

So, in the coming weeks we'll close on the house that we lived in for 11 years. There were many good memories made in that house. And I hope that the young couple can make their own at the same address.

We're happy that it is in the final stages of the sale, and Angie and I both praise God for it happening. If you've been praying for it to happen, thank you.

Doing her part for the Army Air Forces

My grandmother (my dad's mother) was doing her part to help America during WWII. She was an observer for the Army Air Forces. She'd spend hours scanning the skies in upstate New York, looking for enemy planes.

My parents spent the better part of the summer closing up her house. They found wonderful things: photos, books, toys, cookware and such that my grandmother used, loved and kept.

This entry is about one set of items that they found. It is her wings and a manual. The AWS on the wings stand for "Advanced Warning Service." I only scanned two pages from the manual, but all of them were so ripe. These pages are just a representation. 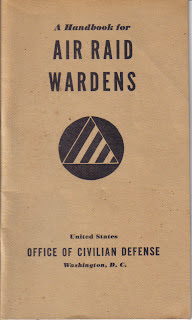 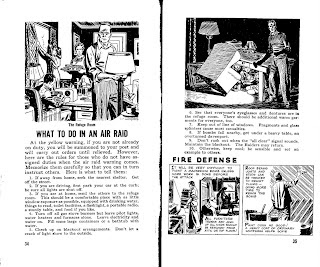 There was also a First Aid Manual that might end up as tomorrow's post.
Posted by Mark Aubrey at 11:05 PM 3 comments: