I checked my facebook feed this morning as I was walking to wake up my daughter.  A dear high school and college friend had posted that she was heartbroken over the tragic shooting at Northern Arizona University.  I looked at the news websites.  Overnight a student had shot four people, killing one, and then was taken into custody.

Sorrow filled my heart.  Anger filled my head.  My eyes welled up with tears.  A sickness churned in the pit of my stomach.

It has been almost seven hours since I first heard of the shooting.  I'm still sorrowful.  The anger has subsided and my head is now filled with many thoughts.  My eyes are still moist.  My stomach has settled.

I write these thoughts, not to encourage debate over what to do and who is right.  I just figured that I should write them down as a release.  To help me try to make sense of what happened.

I can only speak for myself.  I think that I've become comfortably numb to the violence that is happening around me.  Last week, after the shooting in Oregon, I came up with a reason for that.  It has become commonplace.  Yes, the actual violence, but violence as entertainment.

I enjoy watching television.  I take in a few police dramas and sitcoms each week.  The Blacklist.  Blindspot.  Blue Bloods.  The Middle.  Modern Family.  Last Man Standing.  Not tons of TV.  Last night my wife and I watched The Blacklist and then caught up on Blindspot from earlier in the week.  I'm going from memory here.  In The Blacklist episode there were three serious beatings, a police car was shot up, and at least one shooting resulting in death.  In the Blindspot episode there was a fight, an killing from a rifle, a robbery where two people are shot (one later dies), a policeman is shot (presumed dead), and at least three of the "bad guys" die in a shootout.  I really lost count.  When I accept violence like that as entertainment it has to affect me.

So why was I more upset about the shooting in Flagstaff than I was about the shooting in Roseburg?  Because there's an emotional attachment for me.  I love northern Arizona.  I think that if I could have a summer home, it would be in the shadow of the San Francisco Peaks.  In my two years of college I learned so much.  I grew in head knowledge, but more importantly, in people knowledge.  Some of the deepest friendships I have were forged at NAU.

How could the shooter in Flagstaff desecrate my school?  How could he spill blood on its campus?  I don't know the reason why he pulled the trigger.  But he wasn't doing it to desecrate the school.  My guess is that there was some disagreement and he made a very poor choice.  A choice that has consequences, both for him and for his victims.

In this writing I'm staying away from quoting people, either talking heads or politicians.  Candidate X said this.  Commentator Y said that.  Sure.  Let them.  It sounds good at their political rally or on the evening news.

There are no easy answers to explain what happened.  There are no easy solutions.  This type of violence will continue as long as people think of themselves first.  Perhaps if society was more concerned about our fellow man and asked themselves, "How will my actions today affect other people?" we might not be in the mess that we're in.


What if we thought about every action we took before taking them?


Do I really need to cut in front of  that driver to get a parking spot five cars closer to the store?  Can I spare a dollar or two for those in need?  Can I offer to help someone that needs help?  Can I take a few minutes each day to pray for those who are troubled?  Can I smile more?

What would happen if we tried that for a while?

My heart still hurts for the families involved.  I can't imagine the discussions that are taking place on campus.  I can't comprehend what is going through the minds of the parents of each student at Flagstaff.  My thoughts and prayers go out to the whole NAU community.

Looking back at this blog post I rambled a bit, didn't answer my own questions, and raised others to think about later.  But I feel better for having written it.
Posted by Mark Aubrey at 2:20 PM 2 comments:

How I Made a GIF

Last week I noticed that the Digital Public Library of America, along with several of their partners, are having a GIF It Up contest soon.  I wondered if I had the chops to enter.  One way to find out.  Make a GIF.

This would be the second one that I've tried to make.  The first was a quick hack

This was assembled two years ago and I don't remember any of the resources I used.

Basically, it is just a series of images, mushed together in a sequence, so that it appears to be a moving image.  Think of those 16mm movie projectors you'd use in high school.  Well, we used them.  I'm guessing that everything is digital today.

I needed an image to see if my proof of concept would work.

So, I had to find something to edit.  Something fairly simple, but fun.  It needed to be copyright free.  I found a photo from the New York Public Library.


I envisioned the base runner sliding right by the bag.  I isolated the runner. 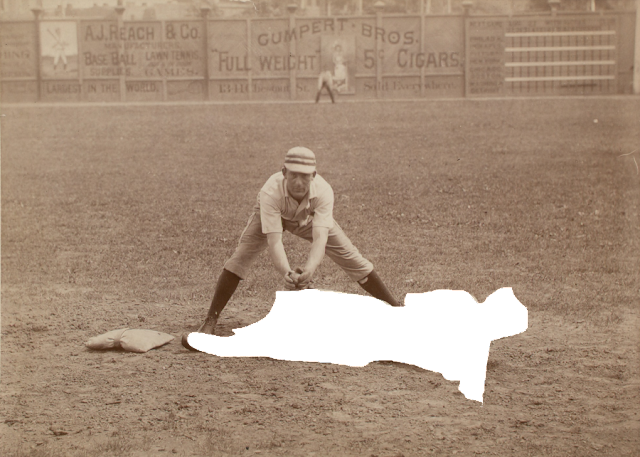 Since I'd be layering the runner back on to the picture, I had to fill in that blank space. Copy and paste some of the existing ground. 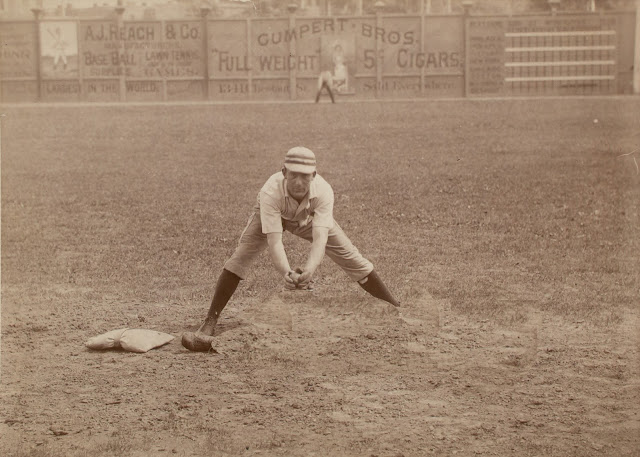 But that left the fielder with just one leg.  A bit of copy and paste from his other leg makes him look not so piratey. 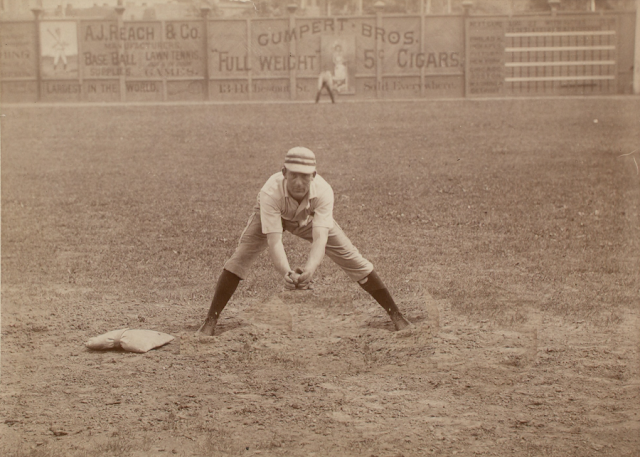 Then just drop in the runner. Not knowing how much to move him, I selected .35 inches at a time. I created an individual image each time I moved him.

These are frames 1, 5 and 10, out of 25.  I then went to EZGif.com, uploaded my individual images, tweaked some dials and got my completed GIF.

I used paint dot net as my image editing software.  It was not my intention for this post to be a complete "how to" on image editing, just a simple overview of how I made my GIF.  The DPLA has some great resources on GIF making.

As I said, this was a proof of concept.  Could it work?  Could I do it?  What could or did I learn from this?

Yes, it can work.  Yes, I could do it.  I need to clean up the images.  I was concerned about pasting the ground into the hole left by the runner.  The patches aren't really discernible.  Your eye is drawn to the runner sliding across the frame.  I do need to clean up the runner.  You know, remove the glove from his knee.  I might also move him in smaller increments.  Maybe a quarter of an inch at a time.  It might lead to a smoother GIF.

So, back to editing, hopefully to make it better.

Posted by Mark Aubrey at 8:40 AM No comments: