Tim Shriver on the Colbert Report

Tim Shriver, Chairman and CEO of Special Olympics, asking Stephen Colbert to help spread the word about the R-word.

You might not like everything, or anything, that Stephen Colbert says.  But many people watched this last night.  Hopefully they picked up on something.
Posted by Mark Aubrey at 11:19 AM 3 comments:

I was looking through some old newspapers and found two articles that dealt with race at Harrison Chilhowee Baptist Academy.  The first one describes a basketball games between "teams of a negro and white high school".  That was in 1949.  Almost seven years later Trustees at "four Baptist-supported schools were authorized today to admit students to "all races" from now on."

I'm glad to say that HCBA, or The King's Academy (as it is now referred to) welcomes students of all races from around the world.  Actually, in 1935 HCBA enrolled two brothers from Cuba, Primitivo and Marcelo Delgado.


images from Google
Posted by Mark Aubrey at 11:28 PM No comments:

Chuck Whiting runs the bibliophemera blog. Yesterday he focused on the author, Rose Wilder Lane and her correspondence with Schulte's bookstore in New York.  Very interesting stuff.  I was drawn not to Mrs. Lane, but the bookseller, Mr. Philip Pesky and later, his son, Mr. Wilfred Pesky.  A quick search on ancestry.com offered up some info.

I was first able to find Philip Pesky in the 1910 US Census.  His parents were Russian and he was born in New York.  He had been married to his wife Minnie for four years.  He was a salesman in the wholesale book business.  (click on the census images to view them in a larger format)


In 1918 Philip Pesky registered for the draft.  At this point he's moved out of New York and into New Jersy.  He's a manager and his employer is Theo. E. Schulte.  I presume that this is the Schulte's Book Store. 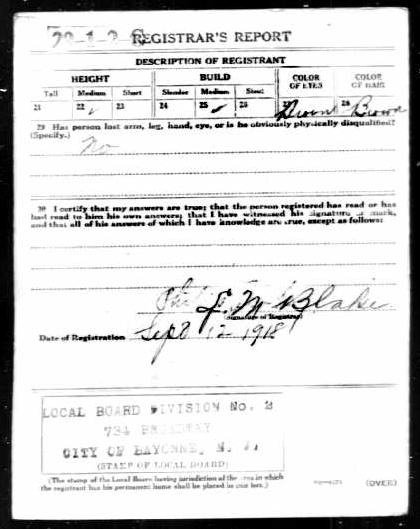 The 1920 US Census shows the family living in New Jersey and managing a bookstore.

Twelve years later Philip once again registers for the draft.  And we can see that he hasn't moved in the last decade and that he's still working for Schulte's Book Store.


On September 17, 1957, The New York Times reported that Philip Pesky, proprietor of Shulte Book Store, died at his home on Momm Court.

On September 26, 1966, The New York Times reported that Wilfred Pesky, president of Shulte's Book Store, died of a stroke on the 24th of September at Columbus Hospital in New York City.

The New York Times had a story about Book Stores of the New York are which included the following description of Shulte's Book  Store:

SCHULTE’S BOOKSTORE
1917-late 1960’s
One of the last of the great bookshops on Booksellers’ Row — the stretch of secondhand stores on Fourth Avenue just south of Union Square — Schulte’s survived labor strife, including a strike right before World War II, and prospered. “It was a huge barn of a store,” said Marvin Mondlin, co-author of “Book Row,” a history of Manhattan’s secondhand bookstores.

The store had four owners in its lifetime, among them the professedly unbookish Wilfred Pesky, who, according to Mr. Mondlin, once announced: “You don’t have to read a book to sell books. I never read a book in my life.”

I was not able to find out anything more of the Pesky family, but I'm sure that there's more out there.
Posted by Mark Aubrey at 1:40 PM No comments:

I was asked to share a communion mediation at church.  This is what I said...

In the preaching series, “Amazed” Randy will be sharing some of the miracles that Jesus performed. I’m sure that we could all rattle off a few of them. Raising the dead. Healing the lame and blind. Turning water into wine. Wow!

I’ve always been fascinated by Harry Houdini and sleight of hand magic tricks. But that’s all they are. Tricks. Houdini had a spare key that was passed to him by his wife’s kiss. A trap door to move from one side of the wall to the other. A distraction and then the slight of hand would take place. I don’t know exactly how he did all of the tricks, but they were purely mechanical or a diverting of our focus. There was no higher power involved. They can all be explained.

Jesus’s miracles can also be explained.


“Fellow Israelites, listen to this: Jesus of Nazareth was a man accredited by God to you by miracles, wonders and signs, which God did among you through him, as you yourselves know. This man was handed over to you by God’s deliberate plan and foreknowledge; and you, with the help of wicked men, put him to death by nailing him to the cross. But God raised him from the dead, freeing him from the agony of death, because it was impossible for death to keep its hold on him.”

Did you hear that? God did the miracles through Jesus. God can do all things. Jesus showed God’s power through the miracles. He also showed love, acceptance, forgiveness, also from God. And he showed his disciples how to remember him through the meal of which we are about to partake.

The juice and bread will be distributed. Take a moment to remember Jesus and God raising him from the dead. Why? “Because it was impossible for death to keep its hold on Him.”
Posted by Mark Aubrey at 2:56 PM No comments: