A week and a half ago I attended a Blogger's Night Concert, put on by the Knoxville Symphony Orchestra. They tossed me a pair of tickets and I was supposed to blog about it.

The review has been brewing in my head for the last ten days, and then one of their minions e-kicked me in the shins, gently reminding me that I haven't held up my part of the contract. So, here goes.

The program was entitled Shakespeare in Love. This was part of the Moxley Carmichael Masterworks Series. And it was delightful.

I arrived about 7:10pm and missed the first part of "The Talk". "The Talk" is where Maestro Richman comes to the stage with one of the performers to talk about that evening's program. On Thursday night he brought Carol Mayo Jenkins and they sat and discussed Shakespeare, music, composers and the like. Then they opened it up for questions. Mind you, this is very informal. I felt a bit awkward raising my hand and asking, "Ms. Jenkins, have you ever done one of those '15 Shakespeare plays in 15 minutes' productions? And Maestro, would you consider scoring some music to play behind it?" I should have. Nobody asked a question. I don't know if they do "The Talk" before every concert or not. They did it last year with Ms. Perlman and it was fascinating. (Note to self: Show up on time. Don't be afraid to ask a question or two.)

The orchestra then came on the stage and warmed up. Then tuned. You'd think that they'd do it the other way around.

The first piece on the program was MacDowell's Hamlet and Ophelia, Op. 22. During "The Talk" Maestro Richman wondered if Korngold had listened and borrowed from MacDowell. 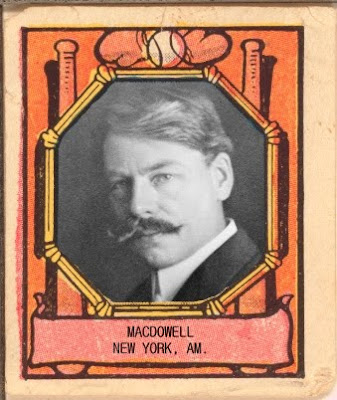 1911 Helmar Stamp (T332), Edward MacDowell
MacDowell's piece had a very cinematic feel to it. I closed my eyes and imaged the music as the background for a silent film. I wonder if Williams had listened to Korngold's King's Row when he wrote the Star Wars themes.

Next up was Tchaikovsky's Romeo and Juliet Fantasy-Overture after Shakespeare. If you watched TV in the early 80's you know this one. "Get all you favorite classical tunes, such as the Love Theme from Romeo and Juliet, as played by one of the greatest pianists of all time, Richard Clompen-Trompen. Relax as the soothing music flows from the keyboard and washes over your troubled soul. (music swells)" 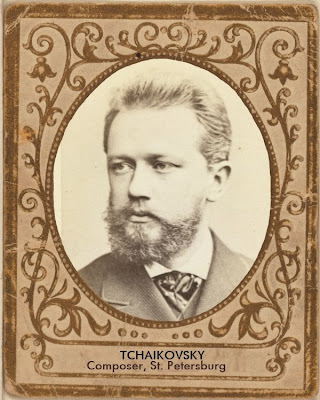 1909 Ramly Cigarettes (T204), Peter Il’yich Tchaikovsky
Yeah, that one. You'll remember that in the Time-Life ads they really didn't mention Tchaikovsky. It might have quickly scrolled by on the screen, but Mr. Reagan wasn't too keen on promoting anything Russian at the time. (Note to self: Do a Google search on "CIA Mind control Time-Life records") The orchestra pulled this off brilliantly, bending to the Maestro's wand.

A short intermission ensued, long enough for the concert goers to visit the bar. And that they did. When the lights in the lobby went down and those on the stage went up, Maestro Richman shared the stage with four gifted actors from the Clarence Brown Theatre and the Women of the Knoxville Chamber Chorale. The actors performed lines from Bacon's Shakespeare's play to Mendelssohn's Incidental Music to "A Midsummer Night's Dream," Opp. 21 and 61. 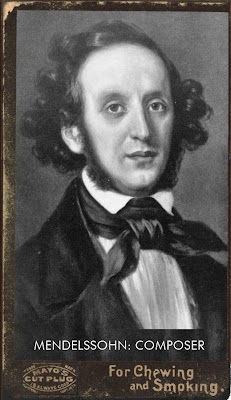 1895 Mayo's Cut Plug (N300), Felix Mendelssohn
I was very curious to see how this would work out. Recently there was some discussion about concert goers clapping at the end of a movement (taboo) instead of waiting for the end of the piece. I wondered if the musicians would take offense at the spoken word stepping on their music. Apparently they didn't.

I wasn't overly familiar with either this story or the music. Sure, I read the guides and tried to remember if I had to read the play in High School. I don't think so. Basically, it is a dream sequence about love potions and fairies, braying asses and Puck, love and sleep. Well, there's more to it than that. Read it your self. The actors, using hats and flowers as their props, made me forget that there was an orchestra just feet behind them. I was drawn to Conrad Ricamora's performance, but all were good.

The opening and closing chords of this piece, although very short, gave me rest.

I'd like to thank the KSO for providing the tickets and I'd like to thank Maestro Richman for guiding the orchestra in a wonderful evening. And I'd like to thank Walker's Formal Wear for donating the actor's tuxedos for the performance. And thanks to Mercedes-Benz of Knoxville for sponsoring the program. This is either starting to sound like the Oscars (insert trademark thingo here) or look like the side of a NASCAR vehicle.

It was a very nice evening and I'm glad I attended.

The 'baseball' card images were lifted from the Library of Congress and cobbled together to make fictitious cards. Since you can't take photos during a performance, I let my imagination run amok.
Posted by Mark Aubrey at 12:06 PM 1 comment: