If you read my wife's blog, you know that I'm scheduled for bilateral hernia surgery on Wednesday. I'll get through this and I thank you in advance for your prayers.

I made it through the lab work yesterday (thanks to prayer, God's faithfulness, Angie's hand holding and a kind and gentle medical professional). It wasn't fun, but was necessary.

I have had the opportunity to visit several hospitals over the last few years and I have just started to notice something.

In the lobbies, hallways and other areas, there are often pictures and plaques showing the history of the hospital.

This Hospital was founded by
Mr. and Mrs. Deeppockets in 1913,
in memory of their kitten, Fluffy.
That's nice and all. But then there's the cabinets full of surgical instruments that date from the time of the Inquisition with all the (in)appropriate info on them.

This rusty saw was used to remove the leg of patients when they came to have an ingrown toenail removed. It used to take 13 nurses to sit on a patient because sedatives had not yet been invented.
Now, really. Who needs to see that sort of stuff? Have a special room (broom closet) devoted to historical medical instruments, with a big warning sign that says:

Enter at your own risk. There are nightmares inside.
So, tomorrow I head in. I know that it will be alright. I know that God is with me. I know that I am loved. I also know that I don't look forward to it.
Posted by Mark Aubrey at 12:41 PM 2 comments:

I've been thinking about movies lately. A few years ago, I compiled a list of my favorite 100 films. So, I thought I'd revise that and give you my top 5 from a variety of genres. What's a genre? Well, a film type. You know... Chick-Flick. Guy-Flick. That about covers them. Actually, imdb.com (Internet Movie DataBase) has a listing of genres. Here are some of them...
Okay, that's way too many. But it will give me something to start with. I can pick one of their genres, pull out 5 films and you'll never be the wiser whether I actually think that they're good or not. Well, I'll try to do you right. And no, I can't explain Film-Noir.

One more film for dads and their boys

Angie is out with her girlfriends, so I had fun with the kids tonight. We ate dinner and then Caroline and I played a bit. Then a bath for her. Edison suggested that we watch another Hitchcock film. Not wanting to sit through 80 minutes of a silent film like The Lodger, I suggested that we watch To Catch A Thief. I tossed him the DVD cover and he seemed generally interested. I reminded him that this wasn't going to be full of high tension, killers and suspense, but more of a light, romantic story, with a bit of humored writing. He showered, read his Bible and then joined me for the viewing. He started off the movie with the question of: "Now, you'll point out Hitchcock when he appears on screen, won't you?" and ended up with "What was the significance of the black cat on the roof at the beginning?" and "So, how did she know that he was the burglar when they had the picnic?" All fair questions. Hitchcock's appearance was obvious. I'll let you watch the movie and answer the others.

It moved a bit slow, but he stayed with it. I think that some of the subtleties might have been lost on him, but he did enjoy it. Some of the dialogue was cute.

Grace Kelly's character, to Cary Grant's, after he was talking to a young French woman: Are you sure you were talking about water skis? From where I sat it looked as though you were conjugating some irregular verbs.

And in another scene, Cary Grant's character, to Grace Kelly's character: Not only did I enjoy that kiss last night, I was awed by its efficiency.

There were more quips. I think that the film was mostly just a vehicle for the two leading stars, although the screen writer, John Michael Hayes, had written other movies for Hitchcock. This one was adapted from a David Dodge novel. Will watching this again make me want to go read the novel? Nope.

I was disappointed that there was no card inside the DVD case showing the chapter titles or interesting facts, but I was greatly surprised that the DVD had the trailer, a 'making of' short, a photo and poster gallery and a few other tidbits.

Overall, a good film and a good time.

In the latest issue of the Vintage Guitar, there is an ad for Willie's American Guitars. Here are two of the entries.

'60 Fender Precision Bass
3-Tone Sunburst, slab board, clay dots, spaghetti logo, tortoise guard, bridge and pickup covers, nice patina but all-original including brown tolex case. Perfectly weighted and balanced, fits the hands like a fine Japanese sword. Well, sort of. For one thing it's bigger. And you can't cut people's heads off with it so swiftly and cleanly that they take a few steps before realizing they're dead and then their head falls off and like 50 gallons of fake blood sprays out. $14,500.

'78 Fender Antigua Telecaster
Antigua finish and pickguard, rosewood board, extremely clean, all-original except for changed switch tip, includes original hardshell case, bridge cover, strap and hang tags, plays well, decent weight. I've seen this unusual color compared to many things, including hard-boiled eggs that have been sitting out too long. Well, actually that was my own comparison. But, hey, it looks good on you. The last line works best if you way it out loud in a Rodney Dangerfield voice while tugging at your collar. $3250.

No, that's just my pennies talking.

I like Elongated Coins. Smashed Pennies. A few good sites are:
But, I digress. I wasn't looking for them, but I found a few machines on our trip. Here they are... 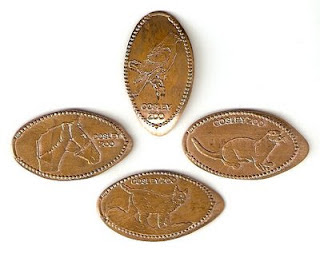 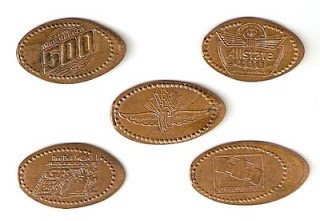 Now, this will look amazingly like my wife's latest entry, but I did it independently.

We're tired and there are pictures still to download from the cameras.

Good night and sweet dreams.
Posted by Mark Aubrey at 12:47 AM 2 comments: