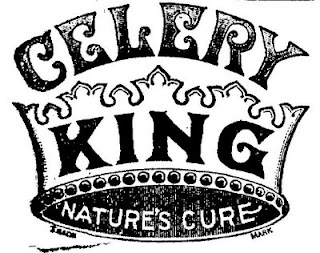 from the November 13, 1903 Plattsburgh Sentinel and Clinton County Farmer newspaper.
Posted by Mark Aubrey at 9:06 PM No comments:

Living in the Past

Yesterday I had the tires replaced on the Honda. I had some time at the mall. I picked up some items for Angie. I visited the game stores, had some Chik-Fil-A's chicken strips while I read some more of my Brother Cadfael book, looked through the CD/DVD store. Many things caught my eye, but I passed. Having a bit more time, I remembered that there is a sports memorabilia store. They had many nice (but overpriced) items. I looked through their open cards. I found two that I liked. Fifty cents each. I liked the price. So, now I have a pair of 2007 Topps Allen & Ginter cards. Even though they are last year's cards, I selected them because these players are in the 2008 World Series. And the cards just look good. 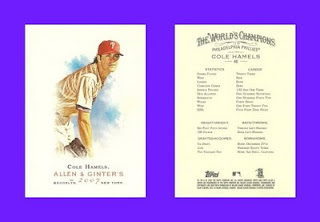 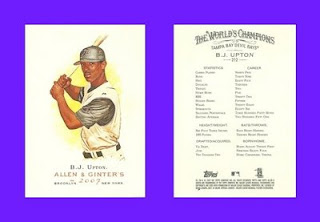 Allen & Ginter printed their original cards in 1887. I think that Topps has done a good job with recreating the feel. I especially like the text on the back of the cards. Numbers are spelled out.

For much more on the 2007 Topps A&G, please see the about.com entry.

Will I get more? No, probably not. These are pretty to look at, and I don't just have that much time or money to get the complete set.

Credit where credit is due: The baseball card images in this post are copyright the Topps Company, Inc. and are displayed with the intent of fair use and because I really like them.
Posted by Mark Aubrey at 10:22 PM No comments: 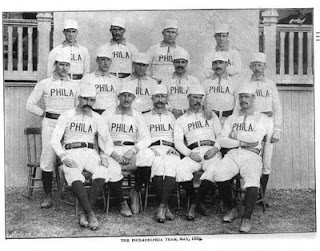 From the book, Athletic Sports in America, England and Australia by Harry Clay Palmer. This book has quite a few anecdotes and stats/records that some will find interesting. Others will glaze over. It was published in 1889. You do the math.

The first pitch has been thrown

and it was a strike. The World Series has started.

So, I tossed together a quick survey. You can take it here.

I would have liked to have seen the Red Sox go against the Dodgers, just for the Mannie controversy.

But I liked the pitching of the Rays in game 7 of the ACLS.

I'm not sure who I'm rooting for, yet. I generally like the NL, but I also like the underdog.

So, Vegas has the Rays winning. We'll see.

Take the survey. Have some fun.
Posted by Mark Aubrey at 8:40 PM 1 comment:

Recently, on a 19th century baseball mailing list, a request came across for information on any living family members of "Wee Willie" Keeler.

So, to find if there are any living family members, it makes sense to look at the family.

I went to wikipedia to get some basic information about him (born March 3, 1872. died January 1, 1923, both in Brooklyn, NY). Then I hopped on Ancestry.com and found some census records.

1880
I couldn't find the family in the 1880 census, either at Ancestry.com or at FamilySearch.org.

1890
The bulk of the 1890 general population census is missing. I didn't even try to look for it.

1900
His parents (William and Mary) were born in Ireland. He and his brother, Thomas, were born in New York. But the 1900 census says that he was born in 1873 (not 1872 as other sites claim) and is 27 years old. His occupation was "professional ball-player" working 8 months out of the year. The family lived on Pulaski Street in Brooklyn. Other information to be gleaned from this census is that his parents were married for 38 years, making their marriage date to be about 1862. Mary had 5 children, but 2 of them had died. 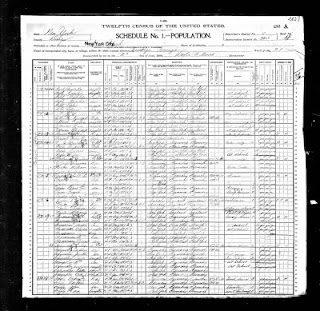 1910
A decade later, Mary has died. Both boys still live with their father on Pulaski Street. William is now 38 years old and continues to be a "professional player" in the industry of "baseball". 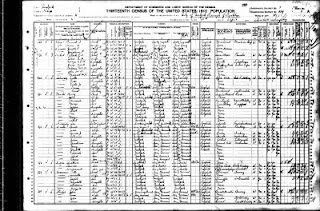 1920
William has moved out of the family house and is a boarder on Gale Street, still in Brooklyn. His age is listed as 48, which is consistent, since this census was enumerated in January of that year. He's a "ball player" in the "American League", despite not having played since 1910. And that was with the New York Giants, a National League team. Of the 19 seasons that he played, 12 of them were for NL teams. 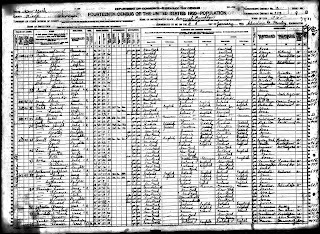 I couldn't find any more from a quick search on Ancestry. World Connect at Rootsweb.com wasn't fruitful.

Then I did some general web searching (google is your friend).

Here are some sites about William Henry "Wee Willie" Keeler...
These sites helped me find out a bit more, specifically the obituary and the FindaGrave pages.

From the photos on the FindaGrave site, it appears that he had two other siblings (Ellen and John), both dying young.

From this information, there does not appear to be any direct descendants of "Wee Willie" Keeler. I have made only cursory glances to try to find when and where his parents came to the US. There is more research to be done, but I figured that I should set out what I have learned already.
Posted by Mark Aubrey at 10:30 PM 7 comments: