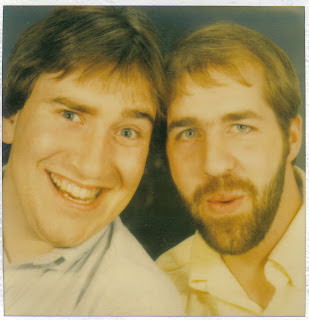 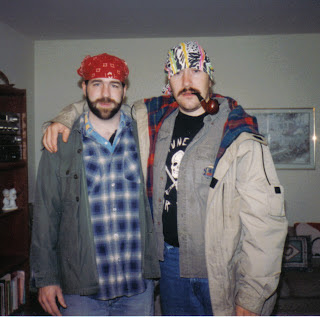 In the past few weeks, Caroline created some art at Parent's Day Out.

Here they are without comment, except to say that the gray blotches are where the wet paints warped the paper and the scanner picked them up as shadows. 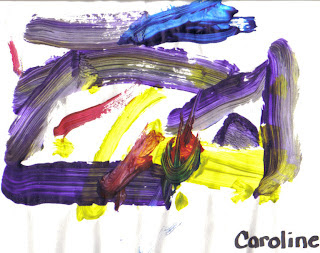 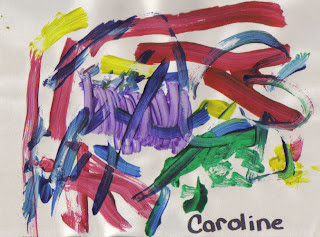 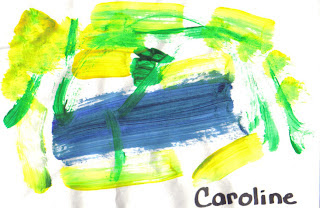 Music I've been listening to lately

For Father's Day, I got an mp3 player. Just a simple 2GB Sansa. It works very well for music.

So, I thought I'd let you in what I've been listening to lately...

Right now, it is Robert Randoph and the Family Band. Archive.org rocks for this sort of thing. I couldn't tell you exactly which show. March 6, 2004 in New Jersey, I think. This is RRFB's Official Site.

Yes, this music entry is link heavy. I did manage to stay away from Wikipedia, though. All links, except the first, point to the official site for the musician(s).
Posted by Mark Aubrey at 10:52 PM 1 comment:

Blast from the Past 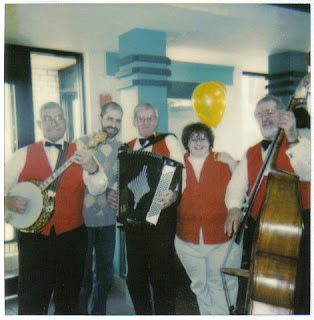 This was probably taken in 1989 in the Chicago are. That is the Don White Trio at some gig. More photos of Don and friends can be found at Doug's photo gallery. Do things really look better in color?
Posted by Mark Aubrey at 7:44 AM 1 comment:

I play an online game called BattleMaster. My friend and coworker, Bill, turned me on to it. It is a team-oriented browser game merging strategy and roleplaying. I've been playing it for about 8 months now. Angie calls it "your luser game." Actually, I jokingly call it that.

One of the absolutes in the game is: Real Life comes first. You miss a turn because you had to study for finals, no problem. Sick? take a few days. Gone on holiday? No problem (my paraphrase).

About a month ago, a new character emerged in our realm. She was from the game region that my main characters were from, so I strike up an in-game conversation. There are mechanisms for being anonymous in the game. So, I had no clue who was on the other end of the ether. I try to be a good gamer, offering to help. We have some game mechanic exchanges, then it turns into a bit of a Role Play (RP). No, nothing weird or strange. Just two players in a game interacting. Because the game has time and space constraints (you only get so many hours a turn and characters can be in two different regions), to effectively RP, it is good to have the two characters in the same region at the same time. With wars happening and armies moving about, it is sometime difficult to accomplish this (see why Angie calls it a Luser game?). So, in game, Willem and Ilya make arrangements to meet in Menedor.

Conan O'Brien (in a nerdy voice): “Fear not, Gandalf is on the way!”

The player of Ilya is named Talita. I call her Tali. She lives in Brazil. São Paulo. Near where the Fifes live. Well, near is a relative term with 18 million people in the metro area. It was suggested that we collaborate on a single document, each having editing rights. We spend some time working on this. Remember, RP is generally done in real time. Coordinating the editing and posting in game presents a problem. We can't make deadlines. Why? Real Life. Her dog is not doing well. I think the phrase "puking all day" was what she used. The dog still isn't doing well. Two different timezones. Her grandma called. "Excuse me, my grandma's on the phone." "I've got to give Caroline her bath." "My boyfriend's taking me to the movies." (That last one was Tali.) Real Life says spend time with your family. "I'm really tired and didn't get my nap on Sunday. I've got to go to bed." (Me). Real life.

We've started IM'ing using GoogleTalk. I never thought I'd be a fan of the IM. Angie can whip around in about six of them at one time. I'm still learning. The conversation drifted away from, "So, what's Willem going to say or do now?" to, "what did you have for dinner?" to "I can't RP tonight, I'm taking Caroline to her first ballgame." With an explanation of why we went. It turns out that Tali's aunt has Ds as well. Somewhere in there, I introduced Tali to Angie's and my blogs. She's seen us and read of our quirks. The conversation last night turned to her flog. Photolog. (I didn't know what it was, either. See, this is a learning experience for us all.) She showed me a picture of some of her family and friends during a post-Christmas vacation. Then she showed me a picture of her grandmother. Her mom's mom. Her aunt's mom. She passed away a little over two years ago. She had some of the kindest eyes that I've seen in a person. Then for the next hour or so Tali and I talked of her grandmother, and how she started two schools for exceptional children, like her daughter. When she did this in the 1970's, there was only one other school like that in São Paulo. She wanted to make a difference. And she did, because no one else was. I told her some of Caroline's story and pointed her toward the YouTube video of Caroline. She was moved by the video and commented, "It'll just keep me smiling for a long time^^"

When Tali stopped the RP chat to spend time with her grandma on the phone, it made me realize even more that Real Life is important and good. When she stopped the RP because Alex (her boyfriend) wanted to spend time with her, it reinforced the grandma call lightbulb moment. Real Life is important and good. Savor life for what it is at the moment. Sometimes you don't get a second chance with moments like that.

I put it into practice yesterday when Bill came through the office asking if I wanted a brownberry cherry tomato. I said no. I don't like tomatoes. But I chased him down and ate it. It was mostly good. Is that a great example? No. I took a walk with Angie and Caroline last night after grilling salmon steaks. Better. Having Edison say, "I love you, dad" when he called from a church youth group outing was very nice. Having a new friend in cyberspace is also nice. Not as nice as the cheesecake pie Angie made on Saturday, but still very nice. :)

Last night I took Caroline to Smokies Park to see the Tennessee Smokies host the Mobile Bay Bears. The evening was hosted by Marvin, Ray, Mark and a few other CVS managers and employees. For a few years now, they've been involved with local charities. This is the second year that they've taken some of the DSAG families to the ball park. We had excellent seats. Marvin and crew really took care of the DSAG families. Caroline had a great time. The Smokies lost, 10-3. We saw an inside the park home run. Actually, the scorer listed it as an error. I don't want to tick off the purists, but when a player hits the ball and it doesn't leave the playing field and the batter makes it safely around all four bases, it is an inside the park home run. We stayed until the last out. This is just a nice photo from the game. 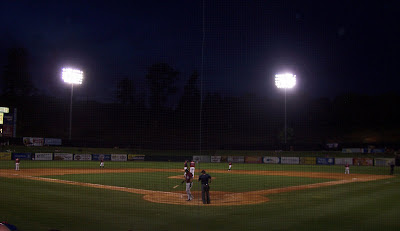 Happenings in History for July 06:

Deaths which occurred on July 06:

The good old days, when Cornflakes were new...

While looking for some genealogy information in an old newspaper (circa 1910), I came across this advertisement... 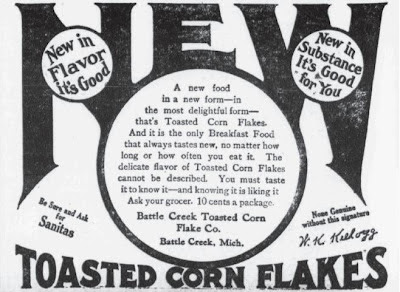 Posted by Mark Aubrey at 8:07 AM No comments: