and that means baseball. 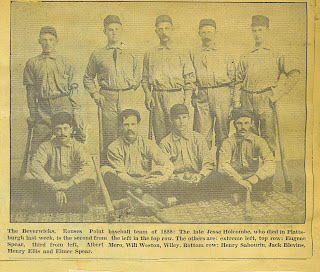 This is a photo of the Beverwycks, a team from Rouses Point, New York, in 1888. The man wearing a tie (Jesse Holcombe) is my sixth cousin, three times removed. On my mom's side of the family.

This photo was probably printed in The North Countryman in early 1939, soon after Jesse died.

Here's a transcription of some baseball news from 1890...

-- A female nine from Ohio will play at Rouses Point on Friday.

-- The game between the Hotel Champlains of Bluff Point and the Beverwycks at Rouses Point last Friday resulted in a score of 9 to 17 in favor of the latter.

-- The game between the Cuban Giants of New York and the Hotel Champlains, played at Plattsburgh last Saturday, was a bad defeat for the local club, the score standing 11 to 1.

-- A special train will leave Plattsburgh at 1:30 p.m., on Friday for Rouses Point to convey those who desire to witness the game between the Female Nine and the Beverwycks, stopping in West Chazy and Chazy, and returning after the game. Fare for round trip, 50 cents.

-- A new home team has been organized at Plattsburgh, with Heffernan and Hubbell pitchers, Hackett and Paul Smith catchers, George Stave, S. D. Curtis, Ned Baker, G. W. Hickey, F. K. Kyle, and S. V. Beckwith, fielders. The new team played a game with Hotel Champlain club yesterday afternoon, which resulted in a victory for the Plattsburghs, the score being 5 to 4.

I joined a Yahoo! fantasy sports baseball league. Some of the guys at work thought that it would be fun. Sure. For them.

Next week I take Edison to Arizona to spend some time with my folks. My mom is having knee replacement surgery, and we'll be taking care of Dad and checking in on mom. They've made arrangements for us to go see a spring training game. The Rockies vs. the White Sox. Edison and I have never been to a spring training game. It should be fun.
Posted by Mark Aubrey at 4:14 PM 2 comments:

This is what happens...

when you have too much time on your hands. This is in reference to Angie's recent post.

I've had an increase in the reading department this last week.

I received a gift card to Borders Bookstore. Last Saturday I cashed it in. Here's what I purchased:
Then, I mooched Slouching Toward Fargo: A Two-Year Saga Of Sinners And St. Paul Saints At The Bottom Of The Bush Leagues With Bill Murray, Darryl Strawberry, Dakota Sadie And Me. I hope to open my mailbox this week and find it waiting for me

On Thursday, Angie and I had a meeting on the west side of town, so we stopped at one of the big used bookstores, traded in some DVDs (old Hitchcock) and picked up some themed mysteries for Angie and Death Note - volume 2 for me.

Today I purchased the
Posted by Mark Aubrey at 10:20 PM 1 comment:

A Day of Beauty

Saturday morning, I took Caroline about 30 miles away, to Karns Middle School, to be a part of A Day of Beauty. Miss Knoxville's Outstanding Teen 2008, Danyelle Trent, hosted the event, where young women with physical and mental disabilities could have their hair fixed up and receive manicures.

Knowing that Caroline wouldn't want to sit and have her hair braided or foofed up, I opted for the fingernails. It took her a moment or two, but she warmed up to one of the manicurists from Tennessee School of Beauty. A clear, top coat was quickly applied and Caroline proudly showed off her painted nails to any that would ask.

There was dancing and door prizes and all the attendees left with a small gift bag. We then went out to Chik-fil-A for "chicken and frie fries." A quick stop at the bookstore and we headed home. 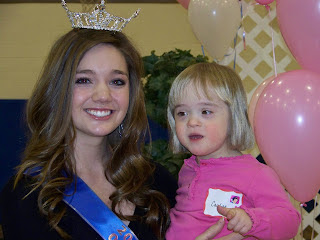 Danyelle and Caroline
Posted by Mark Aubrey at 11:10 PM 2 comments:

Another film for boys and their dads 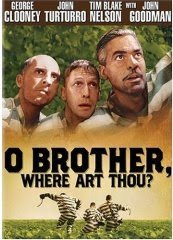 Angie went to her overnight crop. Caroline had taken a bath and was in bed. It was just a night for Edison and I. We were planning to watch a DVD together, but hadn't settled on one particular movie. He suggested Monty Python and the Holy Grail. Or Mr. and Mrs. Smith. Both were vetoed. I asked a co-worker to bring in some Bruce Lee films. What could be better for male bonding than Kung Fu? Well, the co-worker forgot. I had just picked up a 20 movie set of Hitchcock Films from Wal-Mart for $5. Surely there had to be something on there. Edison wasn't so sure. I suggested an Indiana Jones film. Not so much. Then, O Brother, Where Art Thou? came to my mind. A quick race through my memories of that film revealed some minor language, some violence but passable and memorable. How else am I going to get him to learn about The Odyssey? That's right, I'm not.

We dimmed the lights, got out blankets and settled in for some Dapper Dan and old timey music. The Coen brothers struck a high note on this one. Different than Fargo or Barton Fink, this is one that I'd watch again. Edison liked it.